September 11, 2018 Off By administrator
News from https://www.cbc.ca/news/canada/manitoba/winnipeg-phone-scam-victim-warns-others-1.4817609

It was the details that tricked Agnes Frechette into thinking it was real. The man on the other end of the phone had the name of the mall she shops at, what she was buying there, her address and her name.

The caller said she had won a large sum of money — $100,000 or maybe even one million, Frechette can’t remember for sure.

“He was very nice on the phone, and I’m alone, and I thought ‘gee I might as well listen to this guy instead of crying,'” Frechette said.

Frechette, 72, lives alone in Transcona. Her husband died more than a decade ago and she was feeling the winter blues when she got the call that sounded so good.

“I was excited and I thought ‘wow would that be great I could pay all the mortgages and my kids and mine here too.” The caller said she had won some lottery from a draw at Kildonan Place.

You find yourself getting weaker every day and you don’t want to tell anybody because it’s so so embarrassing.– F rechette

She later found out was that it was a lie and there were no lottery winnings — but not until she had given them all her savings, about $6,000.

The scam worked like this: a man would call her repeatedly about her supposed win but before she could get any proceeds she was directed to send cash $1,000 or $2,000 at a time through MoneyGram or Western Union at the nearest Walmart where the cash would then be wired to Jamaica.

The man who called would phone every morning at 8 a.m. and asked if she wanted cameras sent to her house to capture her celebration of the big win. She declined but the man kept calling and said she had to work for him before she got her winnings. “He got very vicious after a while.” 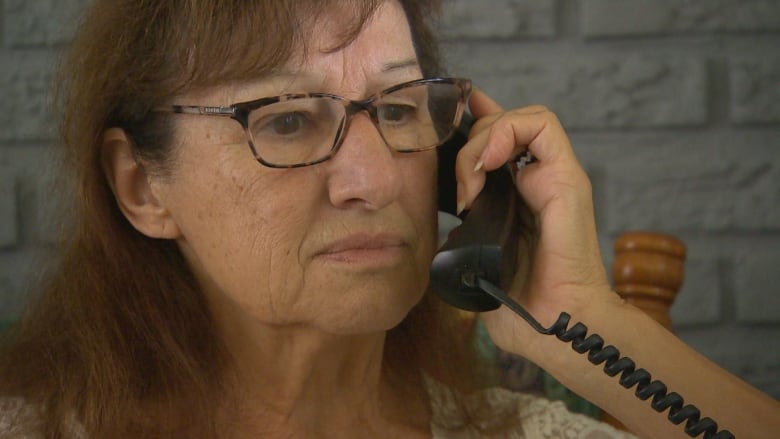 Frechette said she ignored calls from numbers didn’t know but the day she fell victim for a scammer she didn’t have her glasses with her to see it was an unknown number calling — so she answered. (Jaison Empson/CBC)

“You find yourself getting weaker every day and you don’t want to tell anybody because it’s so, so embarrassing,” she said.

Frechette complied and came up with a cover story so her large withdrawals wouldn’t raise red flags at the bank — she told the teller she needed the money for car repairs.

“You don’t want anybody to know how stupid this thing is going,” Frechette said. She also came up with a cover story in case she was asked about the large transfer at the store and said she made small talk with the employees working.

“Every time I went to the Walmart I would go hide in the washroom cause my body was shaking so bad I could not have done that the way that I was. I was a basket case.”

Frechette said the calls continued until the end of January when she ran out of money and realized she had been duped.

She said she felt compelled to keep sending money because of continuing sophisticated threats. On one occasion, she said a man showed up at her door with a pizza asking for $75.