October 29, 2020 Off By administrator
News from https://www.azcentral.com/story/money/business/consumers/2020/10/29/oberst-family-challenges-phoenix-childrens-hospital-charges-boys-broken-arm/3750261001/
CLOSE 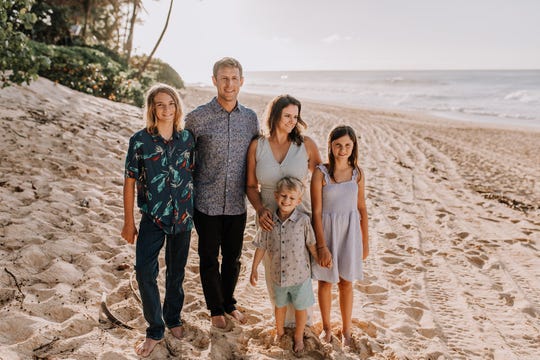 Phoenix Children’s Hospital charged the Oberst family more than $2,000 for a surgery that never happened after 6-year-old Holden (middle) broke his arm, his parents say. (Photo: Courtesy of Lindsey Oberst)

When Lindsey Oberst’s son fell off a trampoline and broke his arm, she took him straight to a Mesa urgent care run by Phoenix Children’s Hospital.

The hospital’s reputation as one of the best U.S. medical centers for children, Oberst believed, meant Holden, a kindergartner, would get the best care.

But while the treatment at the urgent care facility followed by a visit to the hospital was excellent, Oberst said, the billing experience was not.

Months after the family thought their medical expenses were paid off, Phoenix Children’s Hospital billed the Obersts for an additional $2,117 for a “minor surgery” the family said never took place.

When Oberst asked customer service representatives to explain the charges, she couldn’t get a straight answer, she said. If the family didn’t pay, the hospital threatened to send the bill to collections, she said.

Oberst turned to The Arizona Republic’s #HereToHelpAZ program for assistance.

“My son never had a minor surgery, ever,” Oberst, 40, a Gilbert dental hygienist, said. “I’m incredibly stressed out and miserable. I don’t know what to do because I feel like they’re taking advantage.”

The family recently moved and is stretched thin financially with the incidentals that crop up when purchasing a home, Oberst said.

Phoenix Children’s Hospital declined to explain to The Republic why the Obersts were charged for a non-existent surgery.

“It is our policy not to speak with outside parties regarding patient information, which includes billing,” hospital spokesperson Elaina Steingard said in an email.

But Oberst received a call from a Phoenix Children’s Hospital executive about the bill after the newspaper inquired.

Holden’s arm was so swollen from the accident in October 2019 that urgent care staffers made an X-ray, placed the arm in a splint and sling and advised the family to go to the hospital for a cast once the inflammation diminished, Oberst said.

The follow-up appointment at Phoenix Children’s Hospital occurred the next week and went by quickly, Oberst said. A doctor reviewed the original X-ray, determined the bone did not have to be set and made the cast, she said. Holden chose the color blue.

“It was a simple break,” Oberst said. “Fifteen minutes later, he had a cast on, and we were out the door.”

At the last visit, weeks later, staffers at the urgent care center cut off the cast, Oberst said. 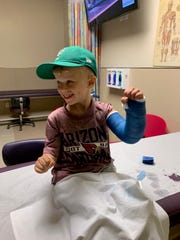 Holden Oberst at Phoenix Children’s Hospital in 2019 after breaking his arm in a fall from a trampoline. (Photo: Courtesy of Lindsey Oberst)

Bills from the urgent care and hospital began arriving, totaling $1,082 in charges to the family, plus additional charges to their health…

The great fake job scam: Our probe exposes the most callous fraud